Notes on how to reverse the facebook messenger mobile protocol. Not planning to write actual protocol docs yet.

Given a physical phone or a VM with bridged networking, where you can just configure the default gateway to be the IP of the computer with mitmproxy, that's probably enough. Otherwise:

I prefer to configure virtualbox with a host-only vboxnet0 interface, and use that for the iptables forwarding commands. That way the VM can only communicate externally through the MITM'd ports 80 and 443.

dnsmasq listens in that interface only, providing dhcp and dns, and it may log the dns queries for extra information.

Genymotion also uses virtualbox as backend - you can just open virtualbox, go to the settings of the genymotion VM, and change the second network interface from NAT to host-only vboxnet0.

Newer versions of the app may have a bundled openssl with its own certificate store. I think versions older than 38 might not have it. Messenger lite 2.1 doesn't have it either.

If it exists, remove /data/data/com.facebook.orca/lib-xzs/libsslx.so from the phone. Some versions (around 64?) fall back to the system openssl and the system certificate store if you do this.

Newer versions (around 100) have openssl bundled in some other library. To MITM those, you'll have to get creative

Start mitmproxy like this to write TLS master secrets to a file. See the mitmproxy docs on this

After configuring wireshark you should be able to see the contents of SSL streams.

Get the custom mqtt dissector and put it in ~/.wireshark/plugins/mqtt.lua. Differences with the built-in one:

To force wireshark to interpret the SSL stream as MQTT instead of HTTP, go to Edit -> Preferences -> Protocols -> SSL -> RSA Keys List -> Edit button and add an entry with the following:

The key file isn't actually used, it's just for the sake of passing the file type validation, this is just to make it reinterpret 443 as mqtt. The actual keys come from from SSLKEYLOGFILE.

Thanks to Lekensteyn from #wireshark for this hack.

Update: wireshark 2.3+ (git master at the time of this writing) adds a "decode as" for ssl streams, allowing to do the same thing as that hack cleanly. Thanks to Lekensteyn again, one year later.

Fancy screenshot of the dissector in action: 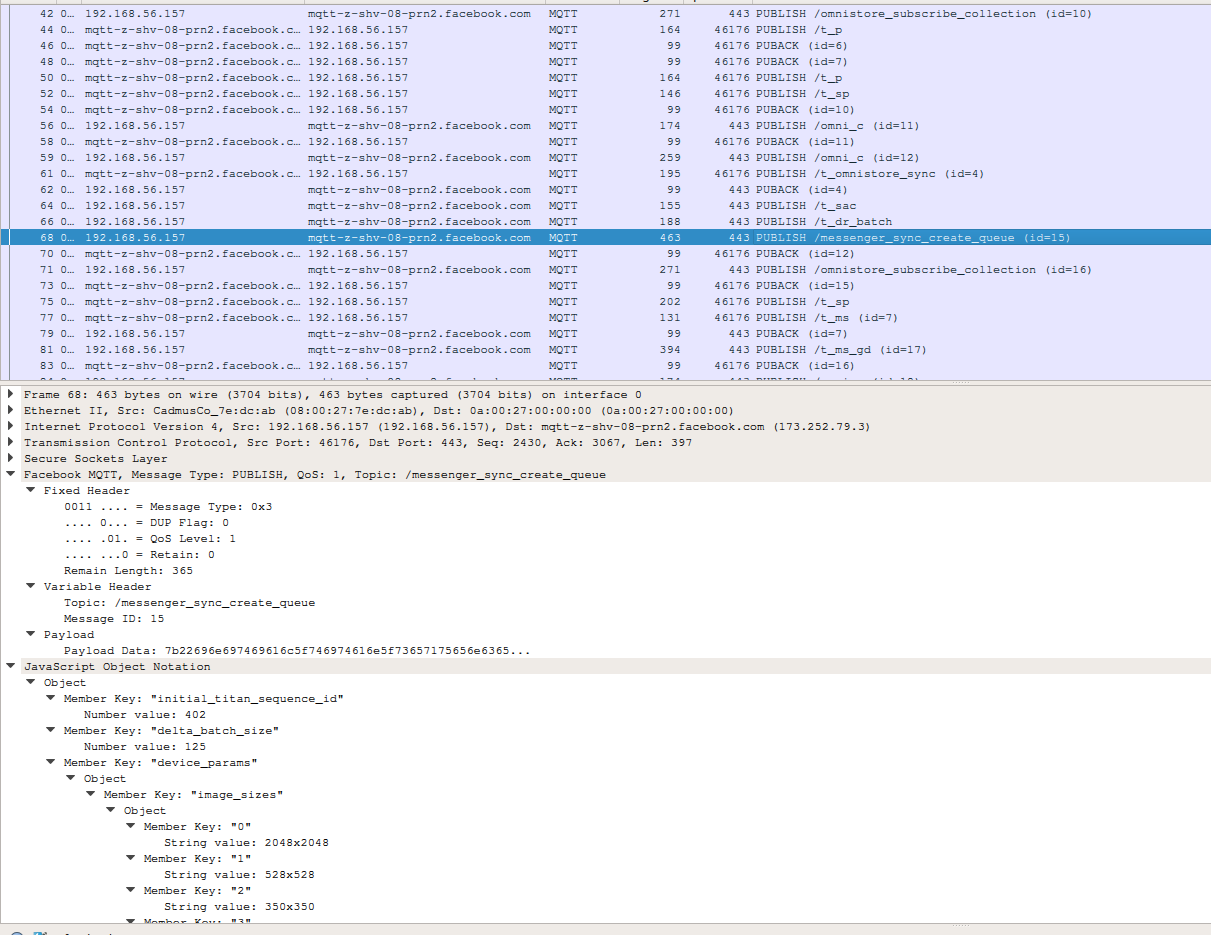 It's not so fancy when you look at the events that have thrift payloads, but that requires some knowledge of the data structures in the dissector itself.

For the http requests I just use mitmproxy, because that's where it shines.

TODO: thrift, may god have mercy on our souls.